The materials I work with sample contemporary visual culture: advertising, packaging, free newspapers and generic internet images. Production methods, using unfashioned materials crudely and playfully put together, contribute to the critique of the content. Assemblages within the installation are declarative. For example, a ‘chandelier’ of assorted paper cups that were used to mix paint, hangs from the ceiling. These simple, uncomplicated devices and mechanisms play off against the highly wrought, contemporary urban environment.

My installation environments engage with sense-making, mixing and recontextualising disparate elements to form new meanings in their reconfigurations. They evoke an environment that gives a sense of our world that is not our world. The arrangement of painting, found objects and images mixed with purely imaginative elements, create suggestions of invented narratives. Maquettes fashioned from everyday materials provide snapshots like rooms in a dolls house or a stage set.

The use of a naive language of construction suggests a non-authoritarian approach, that things can be invented, they are not fixed, and are still in flux and can still be rearranged. For example, using miniatures and white tack hints at movability, like objects in a game. This is also enhanced by the mix of scale and a whimsical tone that pervades the installation.

The work also explores my interest in depiction, illusion and dimensionality - how different forms of two and three-dimensional representation can be combined in a work to evoke the pictorial. Included in the installation is a found wooden frame which I have re-fashioned into a screen using tracing paper and a selection of found objects and images. Two-way viewing holes through the screen allow the viewer to investigate the installation space and its content beyond - focussing attention on the actual site of display, the construction of the pictorial and the act of looking and surveillance. Like its minimalist antecedents, it has the potential to reveal the space and its contents in a new aspect. 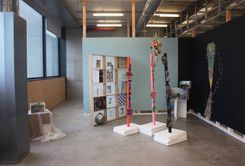 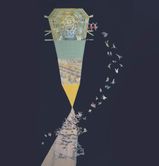 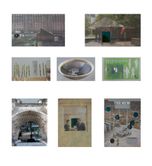 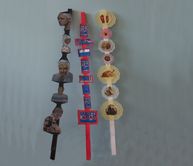 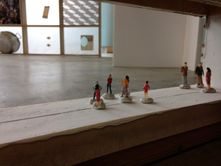